What is the reason for flowers? Why do they exist, in all their beauty, color, and fragrance? Poets and philosophers could give us many reasons. But science offers a concrete, definitive answer: flowers evolved in order to attract pollinators—mainly insects, including bees.

Yes, flowers and bees go way back. Flowers provide bees with nectar, and in return, the bees carry pollen from flower to flower, making it possible for flowering plants to reproduce—and not only garden ornamentals but food crops. A third of all food production worldwide absolutely depends on insect pollinators, including bees.

Today, the bees are dying. Starting in the late 1990s, beekeepers around the world began to notice alarming and mysterious declines in bee populations. The phenomenon known as colony collapse disorder is attributed to many factors, including the widespread use of chemical insecticides, decreasing biodiversity, and climate change—all of which make bees more vulnerable to pathogens and predators.

Given the natural relationship between flowers and bees, you might think that flower farms would tend to support bee populations, rather than contributing to the problem. In fact, on most flower farms, bees are unwelcome guests.

In fact, on most flower farms, bees are unwelcome guests.

“Once a flower is pollinated, typically it is on a faster road to senescence,” explains Amy Brown of Laughing Goat Flower Farm in Enumclaw, Washington—a chemical-free, 10-acre farm at the foot of Mount Rainier. Some flowers respond to pollination more quickly than others: for example, Chinese forget-me-nots (Cynoglossum amabile).

“Bees go crazy for those, and they’ve already got these delicate little petals,” says Amy. “So, if you’re not catching them at the right stage—as or just before the bees are getting to them—you might as well just leave the crop to the bees.”

And, Amy is OK with that. Laughing Goat is one of a handful of flower farms that go beyond avoiding the use of bee-killing chemicals and that actually cultivate bees on the farm. These are typically small farms that mainly supply local markets. The growth of such farms is supported by the Slow Flowers movement, of which Laughing Goat is a member.

“To me, the scope of what we do as farmers is about so much more than what we are getting from the land,” says Amy. “I’m thinking in terms of what this area is going to look like in the long term as a result of my actions. I made the decision not to use chemicals because we had bees. In turn I learned that that supports the diversity of the microbiome, which is the soil environment. Consequently, our farm is also populated by songbirds and frogs and little snakes. I’ve seen this really beautiful blossoming of biodiversity in ways that I hadn’t really considered when I first started.”

It’s not conducive to easy profits, but that biodiversity is a source of deep satisfaction, she continues: “It’s like being a kid again, walking out and seeing little frogs hanging out in the flower beds. I don’t know how to describe it. The joy is palpable.”

Beekeeping is a family legacy: Amy’s husband’s father had been a professional beekeeper at one time, a tradition that his son has kept alive with one or two hives on the farm. Having started with vegetables, the farm now grows peonies, hydrangeas, and dahlias, along with a changing variety of annuals; lilacs and hellebores are more recent additions. An extensive English garden serves more as a showpiece for visitors than as a cutting garden.

Amy does make a point of cultivating certain late- and early-blooming crops, in part so that the bees can discover them at times of the year when flowers are not otherwise plentiful: hellebores, witch hazel, forsythia, Pieris japonica.

“Spring and summer are easy, right? Everyone has flowers that bees can get to then,” says Amy. “But if we have a 75-, 80-degree day in February, which does happen, and the bees wake up from their hibernation and go foraging, we want them to be able to find natural food sources.”

It’s not just honeybees that thrive at Laughing Goat, but bumble bees, mason bees, and many others. Working on the farm, does Amy worry about getting stung? Not at all.

“What they are going to be protective of is the hive, where the queen is,” she says. “If you are actively getting into the hive, there are precautions that beekeepers will take. But I have worked out here alongside the bees since 2015 and I have never been stung. They are incredibly industrious and focused on collecting pollen. I can be cutting flowers that bees are working in and they’ll just move on to another flower.”

While many commercial cut-flower crops are grown in enclosed greenhouses, for most crops, Laughing Goat employs tunnels or hoop houses. These protect the flowers from weather damage but essentially leave them to form part of the natural environment. As indeed, of course, they are. Farmlands, including pasture, occupy more than a third of the Earth’s ice-free land surface.

Farming of any kind that supports bees and biodiversity could be classified under the umbrella of “regenerative agriculture.” It’s a new term, with specific reference to combatting climate change—but the concept is as old as agriculture itself: it’s the idea that farming should not only do no harm to the ecosystems of which it is a part, but can actually play a role in restoring them. Why shouldn’t flower farms be, not part of the problem, but part of the solution?

A bee makes its way through the petals of a zinnia flower. 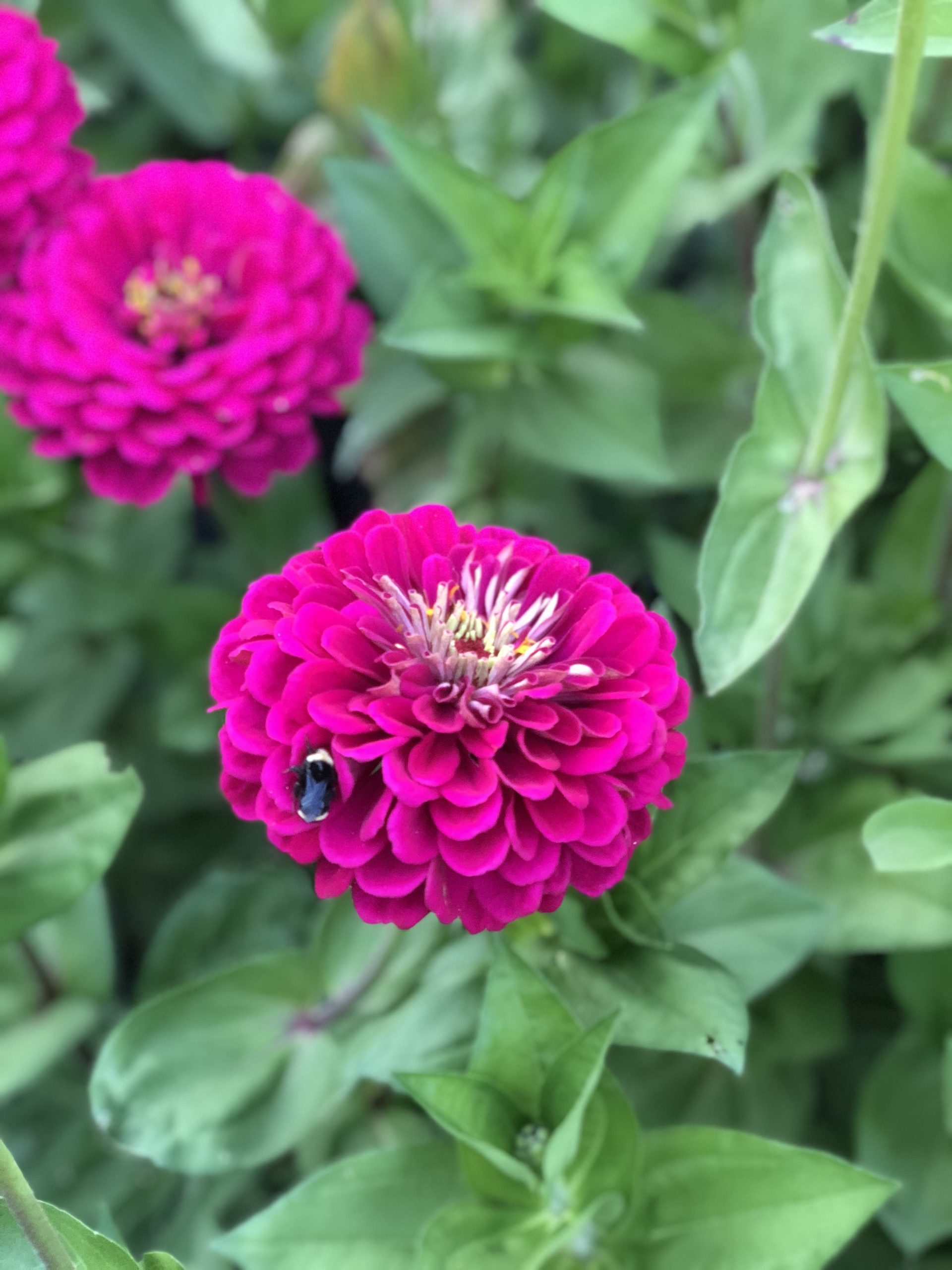 This bee is perched on a type of strawflower called Bracteantha bracteata. 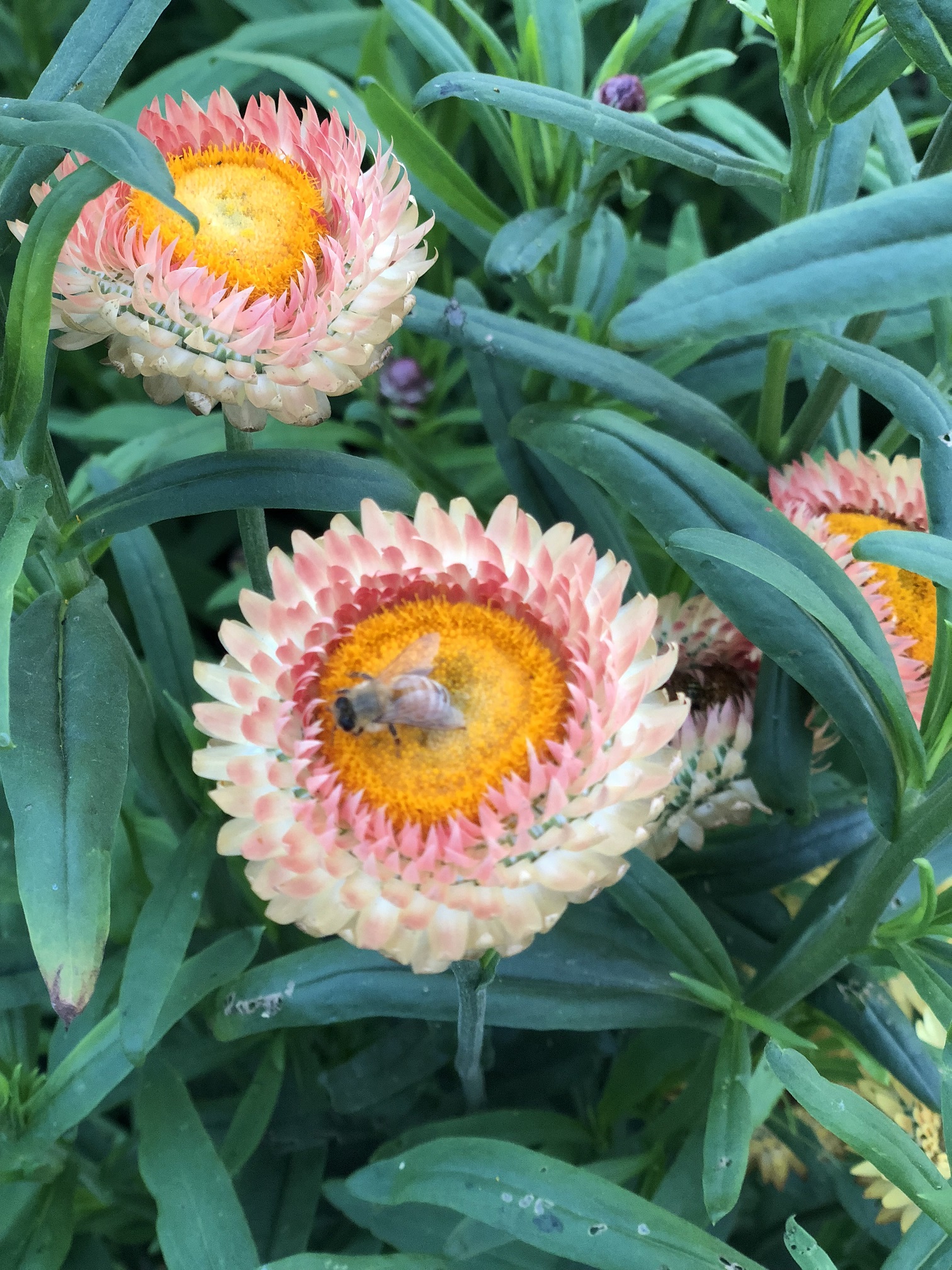 The farm is a haven for frog and bee alike as shown on this artichoke blossom. 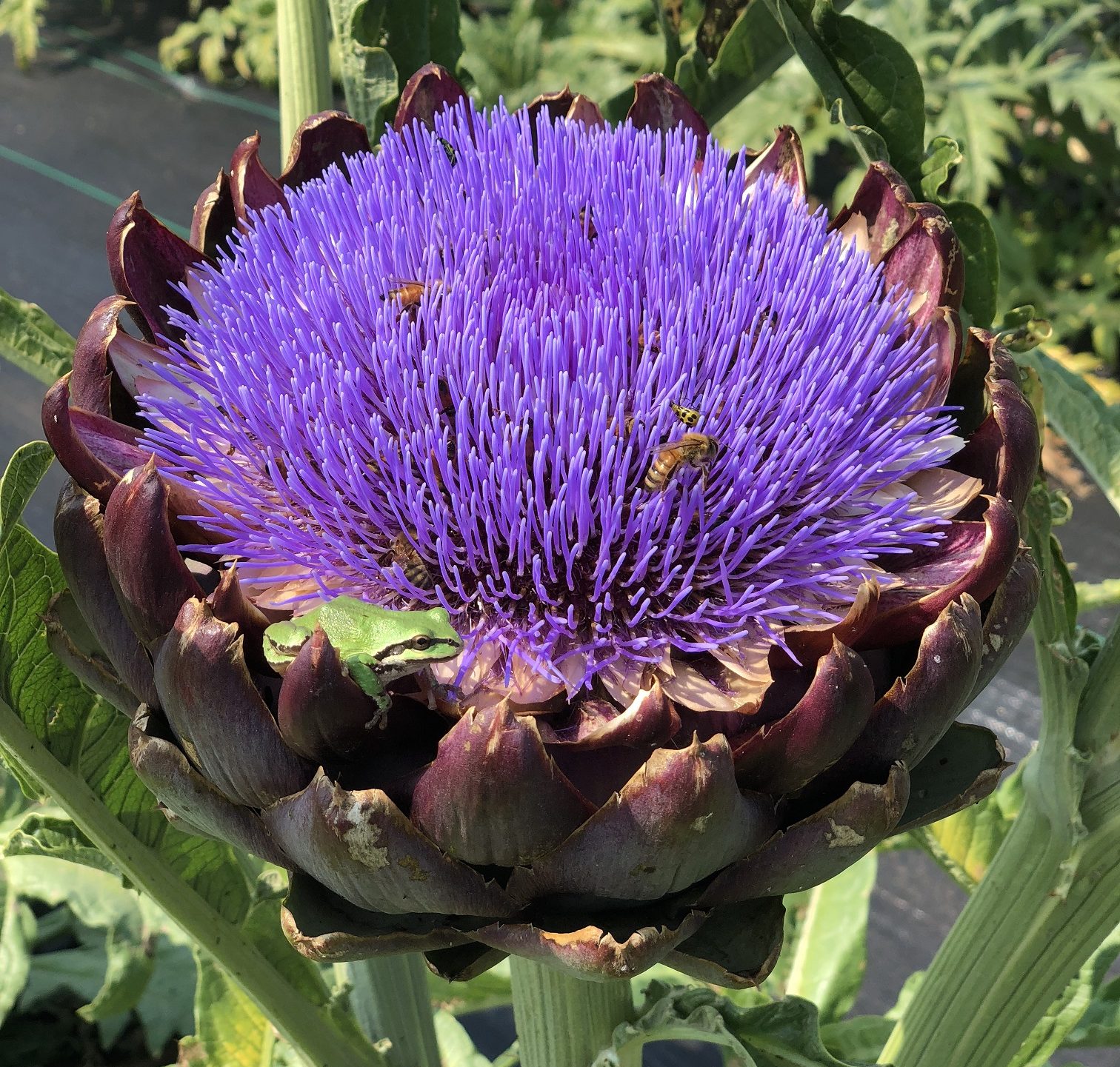 Main Image: A bee resting on a zinnia, Photo courtesy of Amy Brown.

This article was written by Bruce Wright.
BRUCE WRIGHT is one of the most recognized voices reporting on the floral industry today. He has written extensively for Floral Management magazine and was formerly the Editor of Flowers& magazine for an impressive 33 years of its erstwhile publication run. He has also served as Editor for the news section of The Advocate magazine. Bruce is based in Los Angeles, California.